“Just in case if you missed the recent Mobile World Congress, given below is a quick summary outlining the key developments in the mobile industry and what to expect in 2009.
1. The rise of Smartphones: Apple has got some serious competition with every vendor including Samsung, Nokia, RIM, LG, etc. launching their version of a touch screen multimedia handset.
2. Handset Application Stores: Some vendors launched a me-too handset portal and others made a more concerted effort by launching a more long term strategy such as Nokia’s OVI.
3. Mobile Internet and flat rate data: With an increased interest in mobile internet services, flat rate data plans are the way forward to increase data usage and revenues.
4. Embedded payments & content: will drive usage and there will be a variety of embedded and connected payment technologies including micro payments, premium WAP, mobile ticketing and retail.
5. Mobile advertising: will rise but there will be a struggle to establish a sustainable business model between paid for and ad funded advertising.
6. Generally the show had slightly reduced attendance and gloomy economic sentiment. However, the mobile industry has grown to the point where there is more qualified demand for value added services and the ability to deliver them which creates an opportunity for all of us in the value chain.
7. 2009 will be the year of mobile value added services, smart phones, applications and mobile payments.”

Where is the power in the market that you are entering?

What is the relationship between IP and the risk in the proposal?

Investors back people with ideas…not ideas. How credible are you as you present your idea?

How much do you need? What are the full costs?

How much will you make?

Write a report detailing the financial plan for your idea/project.

Hello and Happy Friday! So another Mobile World Congress under our belts. Bit of a damp squib this year I felt. Attendance was, unsurprisingly, down, but that aside, most of the people there were still banging on about the same things as last year.  And the year before. And the year before that. It’s all pretty much the same old really: trying to get people to connect to the web over mobile; most consumers not doing so because it’s (a) too complicated and (b) they don’t want to pay for it. Yada yada yada…

Oh, there was of course a great big gorilla in the room: Apple. Virtually no one from the traditional mobile handset, operator or content markets would even mention what became euphemistically “the A word” (which means something quite, quite different   to all of you reading this who work in the more adult end of the market). That said, they have all basically copied what Apple have done: touch-screen handsets, big screens, easy web access and an apps store. All the while denying (on the record    at least) that they are in the least bit interested in what Apple does.

And all this for a company that is so outré to the mobile market as it stands today  that it didn’t even attend the show. Now that’s brand power.

So, what were the hot topics at the show then?

Everyone derides Apple the control it has over its apps store, but consumers don’t seem to care: 300 million downloads (at least) and all from a handset that has, to   use the much said mantra at the show, “less than one per cent market penetration”.   It must be doing something right. So right in fact that Nokia, Samsung and Microsoft all rolled out apps store-a-likes at the show (to join Google and soon Blackberry). Each claims that it has already been selling apps and that the move is just cosmetic – bring it all together in one place – but the apps store idea is the next big thing for mobile. It makes it simple for the consumer, easy to see the pricing and allows third parties a much needed new way into the market. It also undoes years of planning around MNO portals, off-deck development, micropayments, MMS and many other things that have been staples for the mobile market. And no one saw it coming.

The mobile internet: what’s that then? Be prepared, your kids will soon be asking you this. There is no such thing as the mobile web anymore – it’s just the internet.  And that raises all sorts of problems for the mobile industry. Chief among these is the  idea that consumers will still pay a premium to do things on a mobile. Not for much longer. A study published at the show by BuzzCity hits the nail on the head: most people access mobile web-based social networking sites over wifi while sitting at home.

Handset makers in particular are rolling out handsets that look so different from what they had planned two years ago it’s astounding. They all look a bit like the iPhone  with varying degrees of touch screen technology. Most have much better cameras and video, as well as huge memories. But they do lack the patented single touch zoom patented by Apple, and are the poorer for it. They are all also still beset with  the traditionally awkward hierarchical menus and still come with an instruction  manual. Anything that needs instructions is too complicated. They look nice    however and expect to see more of these high-end handsets on the streets – after all smartphones seem to be bucking the downturn.

and social networking were born to go together. After all, social networking is all about what you are doing and where you are doing it. Better camera phones, web connectivity, rendering of websites and lower data charges – not to mention urban proliferation of wifi  – are all making mobile social networking de rigeur. And adding in location – to offer social location services – is tipped by, Nokia among others, as being the next step. Sharing information about your music or games with your contacts list along with your location also looks promising.

While some in the mobile industry still think that users will pay a premium for mobile services, most don’t. The answer would seem to be ad funding: but with so many big brands cutting ad budgets in all media, is this viable? While many point to a 25 per cent cut in TV ad spend and a one per cent rise in mobile as a good thing, whether it can be sustained remains to be seen. The one thing mobile does offer is that it can  be highly targeted and that you can effectively measure the impact of each ad on a individual, but if the brands don’t have the money…

A move to a more web based approach to m-commerce (or me-commerce, as I   prefer now) means that your traditional credit and debit card payments, along with Paypal are likely to eclipse some of the more rigid mobile payment mechanics as Payforit and PSMS. OK there will still be some simple content sales using these billing technologies, but for totally flexible, non-operator controlled commerce, doing   it via the web and the back is likely to be key.

Of course, none of this works without cheap wholesale data pricing for mobile. Again the iPhone has sort of shown that it works, but cost of data is still prohibitive – hence so many people only doing it at home over wifi. mBlox’s move to “sender pays” is a step in the right direction, but more has to be done to make data cheap and easy.

Operators are all looking to cut energy consumption and go green – with everything from better optimised networks to wind powered base stations. Handset makers are also looking at how to make devices more efficient so need less frequent charging.

And the big handset makers have agreed to develop a universal charger for future devices to be introduced from 2012. So now all phones will have the same micro  USB charger port and will be interchangeable. They are also pledging to make them less power hungry and to turn themselves off when not in use (if still plugged in).    The move is likely to boost manufacturers green credentials too – and make life a    lot easier for consumers.

Many seem to think that MNOs should become dumb pipes. No. What they need to become is smart pipes and, controversially, they must build networks that are adaptable to future demands. So far, in its 20 year history, the mobile network  industry has failed to predict every single major development – hey, 3G was going to be all about p2p video calls; turned out it was all about YouTube. What it needs to do is ensure that its networks can adapt to the unpredictable.

The impact these issue will have on the telemedia sector will be debated at WORLD TELEMEDIA 26 -28 APRIL. For more details go to www.wtevent.co.uk

Presentation topics to cover in one minute

Students who participated in the crit:

By the way …The volvo ocean race can be followed via mobile. Recently published stats show that of the people that follow the race on mobile 45% of them are in China!

What are the critical dimensions?

Number of coins in the Euro set

Size of each coin

Number of coins in a UU paper coffee cup

Size of target area of hopper 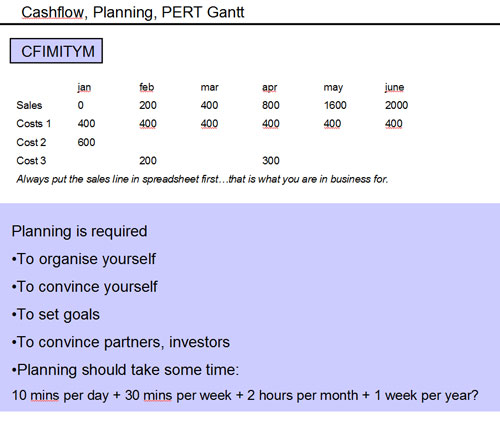 Cash sources:  Investors; as little as possible, Govt; generally after the spend, Sales; as quickly as possible.

For the project that you have shown in assign 1,2,3 create a plan

showing: cashflow, resources (time), sales. Display this plan as a PERT chart. Do the plan on a large paper. Do not use A4, do use a computer.