Norbert Wiener defined cybernetics in 1948 as “the scientific study of control and communication in the animal and the machine.” Others define Cybernetics as the art of Steermanship or Helmsmanship. I prefer that idea, that is the idea of being at the helm is preferred over Wiener definition. I prefer it because I sail. When you are at the helm you are in control of a machine; the boat. The machine converts wind energy into motion. The helmsman directs the machine to where he wants to go and reacts to the changes in circumstances while underway. Sometimes sailing can be hard work as you fight the elements but a good helmsman knows his boat and allows the boat to do the work, to absorb the force and he sails on in good order. The machine and the man are in harmony.

Gordon Pask argues that Intelligence is evident when there is a conversation. Intelligence is developed as one person extends an idea offered by another in a conversation. The conversation does not necessarily need to be between people, it can be a conversation with oneself. When alone an intelligent idea is developed as it is discussed in front of the mirror of the mind. What is critical is that the idea is reflected between the initial internal idea and and the reflected external form. For example a day dream is firmed up when fully conscious and committed to memory. A poem is imagined and rehearsed in silence then spoken and then committed to paper in draft form. At each point there is reflection and revision.

In Industrial Design drawing is often used to help solve 3D problems. Typically the problem is difficult to resolve – at least that is, wholly, in one go. So a sketch is made and the problem is partially resolved, it can be worked on later, evaluated, it may be an inspiration for another concept, it can be shown to others, tested and developed and measured.

Design sketches can vary from those drawn on the back of a beer mat to fully rendered computer generated 3D models. All these design drawings are similar in so far as they are representations of a thing that is not made yet. The Designer is giving form to the new product. The Designer is using drawing as the tool by which he engages in a self conversation. The mental process is one where the idea forms in the head (corresponding to the project brief) and it is then drawn out. In the language of Cybernectics the initial idea in the head equates to the internal component of the new idea and the drawing is the external component of the idea.

It would be a mistake to try and separate the external and internal components of the idea because the original thought and the drawn image of the thought have a cybernetic relationship. The two (the internal thought and the externalised drawing) combined together are a machine for designing things. The linkage between the brain and the image is via the neck, arm, hand, fingers, pencil, paper. The reflection back comes via the eyes which see the image being formed and the completed image.

Bearing in mind the Cybernetic aspects of design problem solving using drawing it is clear that there are several places that the loop can falter:

The conversation hand-overs from one part of the cybernetic loop to the next are essentially the elements that determine the efficiency of the whole design machine (the person and the drawing). What practical actions can be taken to improve the efficiency of drawings?

1. Build a vivid internal picture. A design drawing is not like life drawing, there is no model in front of you. The thing you are trying to draw is in your head. Are you sure the picture you are about to draw is properly formed in your head?

2. Remember what you are drawing. Drawing instructions need to be sent from the head to the pencil via your arm. This is an encoding task. It is difficult to do, you need to concentrate. You need to place the idea in your memory until you have it drawn out. At the same time as remembering what you are about to draw you need to encode and send drawing messages to your hand. These two tasks combined can all just be too much leading to information overload. Information overload happens to some people, but for others there is a tendency to underestimate how much effort is required to think of something and then draw it. The result for either group is a drawing that doesn’t come out right – literally.

3. Practice Drawing skills. Assuming that the idea is well formed and the instructions have effectively been sent there is the matter of drawing fluency that can undermine the effectiveness of the drawing. Simply, if the designer can’t draw well enough then the drawing will not serve its role as part of the cybernetic relationship and the thought will fail.

Remedy: Practice. Nearly everyone can draw well enough to communicate their ideas about how something should be. Being better than others at it – as a professional designer might be – is a matter of practice.

4. Reflect on what has been drawn. The drawing is on the page but it is not examined or looked at. The drawing once made is forever forgotten. No reflection ever takes place. Perhaps the drawing is simply thrown away.

Remedy: Number the pages. Put a value on the sketches. They are not ‘just’ sketches, they are the externalised part of your thinking. Look for progressive change as one page develops into another page.

5. Fools Gold. There is a natural tendency to over appreciate ones own drawings and very often design drawings can be beautiful. When the drawing and the problem solving thinking are in harmony the ink on the paper almost seems to order itself into beauty. However vanity sometimes overtakes the greater good and we draw what looks good on paper rather than the drawing that really contributes to solving the problem.

Remedy: There is no remedy for this. It happens to everyone. We see what we want to see.

So, I figured out what I will be teaching next semester: This is what it looks like:

I wrote this module but I have not taught it before: it will cover the following items: Story structures, storyboards, icon design, information design, data, information, decision. This module is with Year 1 Design students and sounds like fun.

This one is for Year 2 Design students. This is a project based module. I anticipate that we will get some new product and or service inventions developed here. I am going to squeeze in something about Roy Stringers Navihedra also. Exciting.

This is a Masters of Design Module. The module is a series of 5 lectures including: Anto and Rob’s Gold Rush story and Intercept the Strategic Vector. There is a day of Elevator Pitches also.

I will be supervising a few BDes final years, don’t know who or how many yet. I also have a two MDes supervison students. That’s it, should be a busy 12 weeks. Starting, 27 Jan. 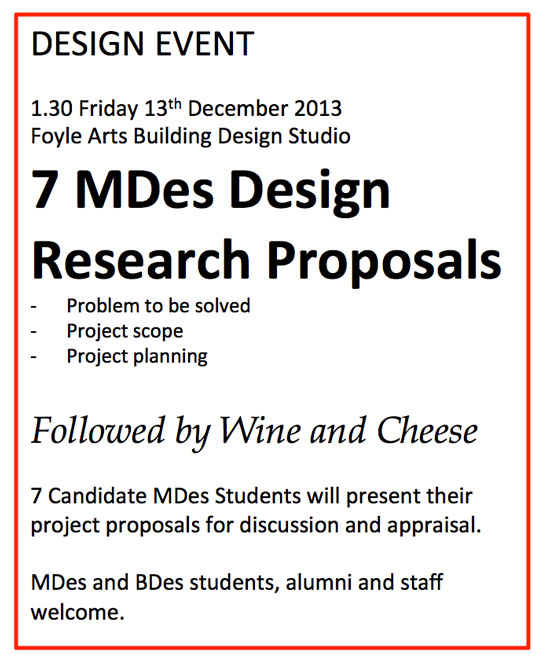